One of my favorite books of the year — Kathy Page’s collection of short stories, Paradise & Elsewhere (978-1-927428-59-7), has been longlisted for the Giller Prize! Here’s the press release from the publisher, Biblioasis: 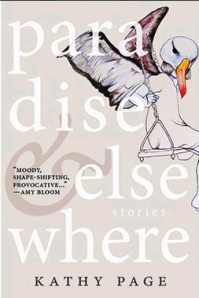 “On Tuesday, September 16th, 2014, the Scotiabank Giller Prize announced that Kathy Page’s Paradise and Elsewhere, a short story collection published by Biblioasis/John Metcalf Books this spring, was longlisted for its $100,000 annual fiction prize. Paradise and Elsewhere was one of only two short fiction collections represented on the longlist, and Biblioasis one of two independent presses (as well as the only small press).

“Of the longlist, which at 12 titles is one of the smallest in prize history, the jury writes: ‘We’re celebrating writers brave enough to change public discourse, generous with their empathy, offering deeply immersive experiences. Some delve into the sack of memory and retrieve the wisdom we need for our times, others turn the unfamiliar beloved. All are literary achievements we feel will touch and even transform you.’ And transformation is indeed key to Paradise and Elsewhere, a collection that Amy Bloom has described as ‘moody, shapeshifting, [and] provocative,’ and Margaret Atwood as ‘tight, strange, nifty stories.’ The collection has received rave reviews in The Globe and Mail, The National Post, The Vancouver Sun, The Minneapolis Star-Tribune, The Barnes & Noble Review, and more. And in its discussion of the longlist on their blog, national book trade magazine Quill & Quire singled Kathy Page out for praise, citing hers as ‘one of the strongest books of the year.’

“For Page, who at one point feared this short story collection wouldn’t see publication, this news comes as a vindication. ‘The short story is seen as a less commercial genre,’ she comments, ‘though that’s something that could change at any moment: I think there’s increasing appreciation of what the short story can do, and those who love short fiction are very passionate about it.’ And for publisher Dan Wells, whose company specializes in short fiction and is celebrating its 10th anniversary this fall, the news was very welcome indeed. ‘This is an incredible book, and it comes from one of the strongest literary years we’ve ever had,’ says Wells, whose 2014 titles include works by Diane Schoemperlen, Ray Robertson, K.D. Miller, C.P. Boyko, and more. ‘We’re extremely proud.’ Page is also launching the first US edition of her Governor General’s Award-Nominated novel Alphabet this October, and has appearances scheduled in Brooklyn, Montreal, Toronto, Kingston, Austin, and Waterloo.

“The Giller, after bumping their 2014 prize amount to $140,000, is now the richest fiction prize in Canada. The other longlisted titles are Waiting for the Man (Arjun Basu, ECW), The Betrayers (David Bezmozgis, HarperCollins Canada), American Innovations (Rivka Galchen, HarperCollins Canada), Tell (Frances Itani, HarperCollins Canada), Watch How We Walk (Jennifer LoveGrove, ECW), Us Conductors (Sean Michaels, Random House Canada), Moving Forward Sideways Like a Crab (Shani Mootoo, Doubleday Canada), The Girl Who Was Saturday Night (Heather O’Neill, HarperCollins Canada), My October (Claire Holden Rothman, Penguin Canada), All My Puny Sorrows (Miriam Toews, Knopf Canada), and The Ever After of Ashwin Rao (Padma Viswanathan, Random House Canada). The winner will receive $100,000, while each shortlisted author will receive $10,000. The 5-title shortlist will be announced at a special live event in Toronto on Monday, October 6th at 11 a.m., and the winner announced on Monday, November 10th.”